Apple’s iPhone did better than expected in Q3 due to surging sales of the new iPhone 11 in the U.S. and Western Europe

According IDC’s latest report filed late yesterday, worldwide smartphone shipments increased 0.8% year over year in the third quarter of 2019 (3Q19) reversing seven quarters of decline.  In total, companies shipped a total 358.3 million smartphones during the quarter, which was up 8.1% from the previous quarter and enough to return the industry to positive growth. 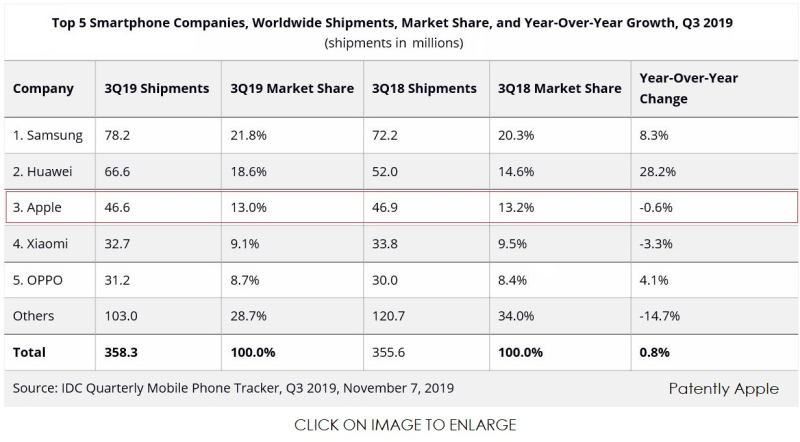 IDC report that “Apple shipped 46.6 million iPhones in 3Q19, which was a slight decline year over year but still better than most expectations. Apple continues to sell some refurbished iPhones via its own channels, which sustain and possibly grow the installed base, but also impact iPhone revenues. Newer iPhones, specifically the iPhone 11s and XR, did very well this quarter, capturing strong share in important markets like the U.S. and Western Europe.

Digging into the growth areas, India led emerging markets in total, which together were responsible for propelling worldwide growth, mainly from the rise of Chinese brands. In China, greater consolidation toward the top 5 brands was the main trend in the quarter. The top Chinese brands all increased their local shipments in preparation for 11.11 or “Singles’ Day,” the Chinese equivalent of Black Friday for shopping in the U.S.

Samsung gained share in 3Q19 with annual growth of 8.3% on the back of the Galaxy Note 10 launch in August and increased A series volumes, with a total of 78.2 million smartphones shipped. The lower-end to mid-range A series in particular helped to fill in the gaps left behind by Huawei. For other stats, read the full International Data Corporation (IDC) report.

During Apple’s calendar Q3 conference call (Q4 fiscal), Apple’s CEO stated that “In iPhone, where customers have only begun to get their hands on the strongly popular and unmatched iPhone Eleven and iPhone Eleven pro models, our year over year performance continue to improve.

Since its launch, the iPhone 11 has quickly become our best selling iPhone. iPhone 11 Pro and iPhone 11 Pro Max deliver even more advanced performance for users who want the very best out of their smartphone.”

Call of Duty’s ridiculous shotgun has been nerfed

OnePlus 5 will also get Android 10 but not soon

iPhone 11 two-way charging may be inside, but disabled

The 10 most popular programming languages, according to GitHub