I can never get the folks at ILMxLAB to acknowledge that their Vader Immortal virtual reality experience is actually a game. They call it an “experience.” I call it a game. I suspect it has something to do with the legal deal between Disney and Electronic Arts. The latter gets to make Star Wars games, while Disney’s divisions like ILMxLAB have to make, uh, experiences.

Whatever you call it, Vader Immortal is one of the more interesting creations for Facebook’s Oculus Quest and Oculus Rift VR headsets. ILMxLab and Oculus released the surprise Episode II of Vader Immortal on the Oculus Store during a keynote speech on Wednesday at the Oculus Connect 6 event in San Jose, California. 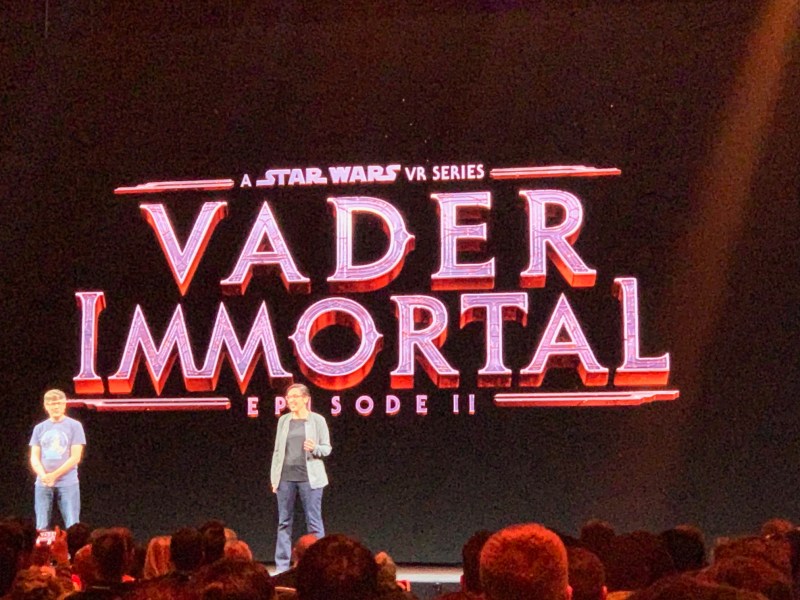 You play a kind of padawan, or trainee, for Darth Vader. I stepped into the role and did some training in the Lightsaber Dojo II. It was better than the first episode because I could use Force Push powers to get rid of the enemies flying around me. And I got to hear the hissing breath of Lord Vader himself, who seems to take an interest in my ability to manipulate some rocks.

It’s a tantalizing addition to Star Wars. And while the experience is on rails, where you teleport from spot to spot on a predefined path, it really makes you feel like you’re in the presence of Darth Vader himself.

I talked with the folks at ILMxLAB and Facebook about this: Supervisor, Creative Development and Experience Design Jose Perez III and Senior Producer Alyssa Finley, as well as Colin Slevin, head of media, AR/VR experiences at Facebook.

They have one more part to go in their VR trilogy. Episode II is available now on the Oculus Store for $10.

Here’s an edited transcript of our interview. 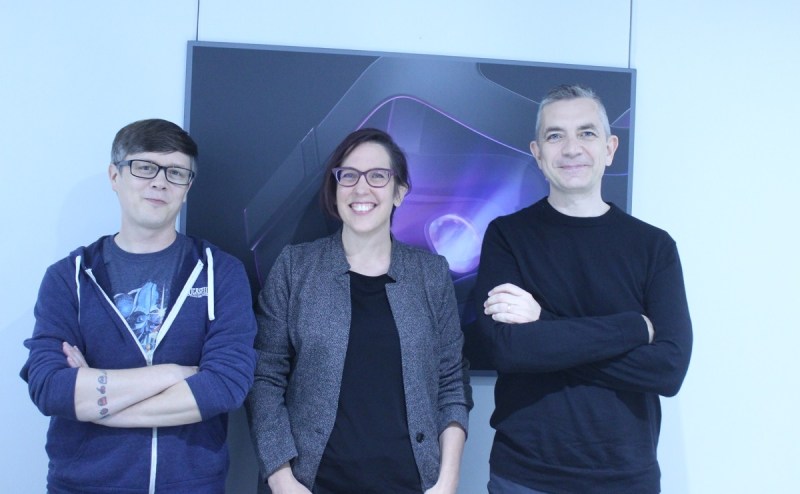 GamesBeat: You have Vader Immortal episode two out. How long have you been doing that now?

Alyssa Finley: They planned out the story as a story that had chapters built into it. That’s really helped us, because it’s been a foundation to lay the whole thing on. We’ve been able to do a bit of getting some people started on one episode while the previous one is finishing up. We’ve been able to intertwine the development in a way that’s been helpful for the team. We learned a lot from finishing the first episode, and we were able to bring those lessons into episode two.

Jose Perez III: Episodic development is like a relay race. The people at the start of the second episode are picking up the baton from the people at the tail end of the first one.

GamesBeat: Can you explain more about the storyline and where it’s going in episode two?

Finley: You start out in episode one and you learn that you have some importance to Darth Vader, which is a pretty special feeling from the start. Then, at the end, he says, “You’re going to need the Force in order to survive the path ahead.” Episode two picks up from that moment exactly, picking up with him teaching you to use the Force. What a teacher Darth Vader is. [laughs] From there you get set loose in the area underneath his castle, and you have to use the tools you’ve picked up in order to make it through the story.

Perez III: Plus giant monsters, which is obviously an important part of this.

GamesBeat: Giant monsters on your side, or on somebody else’s?

Perez III: I don’t think she’s very friendly to you in this thing. I’d like to think in maybe a different setting you could be friends, but here she’s definitely hungry and upset.

GamesBeat: I’m still figuring out who’s my friend here. Darth Vader asks me if I can do something with this rock thing, and I think, “Why should I help out Darth Vader?”

Perez III: It says a lot about the power of the character. When you’re in there, you’re already questioning the motivations, which is fantastic. 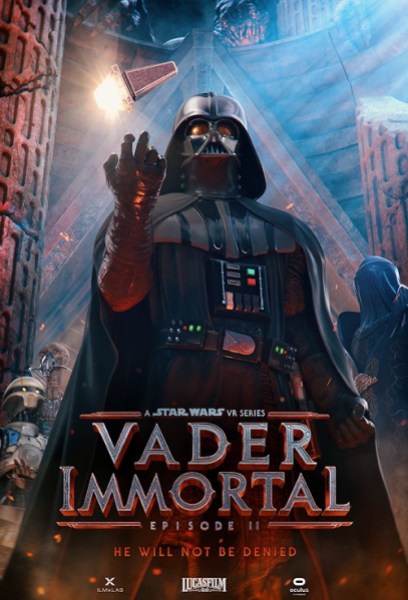 GamesBeat: So you want me to think about that?

Perez III: I want you to have fun and think about whatever it is that you’re doing. [laughs]

GamesBeat: As the player, do you develop some kind of agency at some point, to make your own decision here as opposed to just doing what Darth says you do?

Perez III: The Vader Immortal series is definitely a narrative-first experience. It’s about telling a story and pulling you through that. The combat does open up a bit, so there’s definitely some agency in the choices there throughout the story. The dojo is all about agency. Do I want to use the Force? Do I want to hold the lightsaber? Do I want to throw the lightsaber? Am I using traps around the world to squish things? We get the best of both worlds, I think.

GamesBeat: My thought about the dojo before–could you develop that more into something that people could spend a long time with? The episode itself is only about 45 minutes or so.
‘
Perez III: The first episode was about 45 minutes, yeah. If you spent enough time in the dojo, it really does ramp up. We’ve seen people spend hours in that. The new dojo is a lot more accessible, I think. It’s easier to jump into, especially because you can attack from a distance now. The first one was a lot about waiting there and feeling it out. It could get really intense. This one, we made it a bit easier, just because you’re so much more powerful. We’re hoping that people enjoy it and that does extend their time with the series.

Finley: You can also really pick your style in the new dojo. Dojo one was all lightsaber, and beautifully so, but now you can really–you can bring a lot more of yourself to the gameplay. For me, that made me want to try harder and get better, get to those end levels that were super hard.

Perez III: It’s fun to see the different styles come out. Some people will light up the lightsaber and then just put it away and use the Force as much as they can. Other people will hold it old-school. I throw it like crazy. 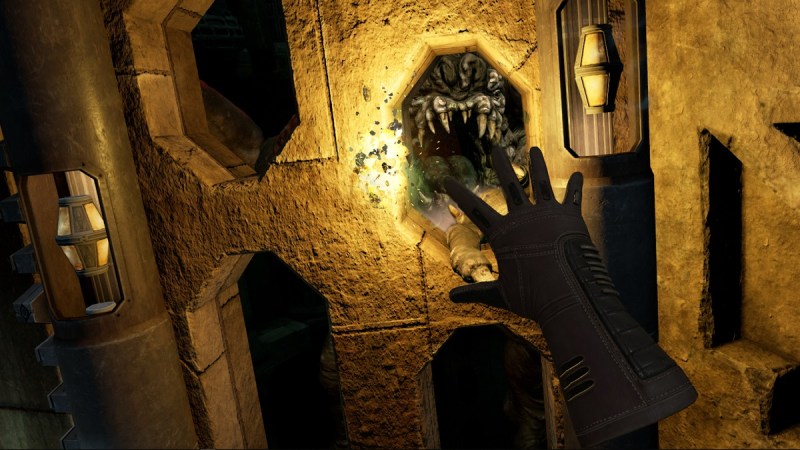 Colin MacKie: All I do is throw it.

GamesBeat: Does it have an ending to it, the dojo?

Perez III: The dojo is really just about having that experience, having fun with the toys of Star Wars. This one has 50 rounds in it, and the 50th round is definitely not easy to complete, but we have a reward structure throughout. You unlock new lightsaber hilts, a bunch of the iconic ones, from Mace Windu to Darth Vader. Now we have gloves as well that you can unlock. As you progress through it, you’ll unlock a bunch of fun rewards, and with Oculus Home on Rift you get some fun things that show up there as well.

Finley: And all the rewards from the first dojo. I can get my purple kyber crystal, which I quite enjoy.

GamesBeat: Are you still calling this an “experience” rather than a game?

GamesBeat: Have you settled on how many episodes you want to do?

Finley: We’ve announced three episodes. That’s the way we built the story from the get-go, to be a three-episode arc — a beginning, a middle that you’ve just seen, and a pretty awesome ending. 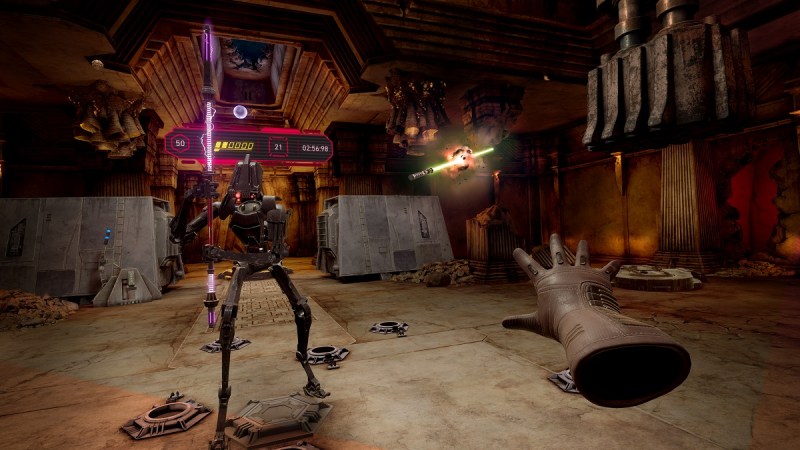 GamesBeat: Does the third one have a date yet?

Finley: We’re here to talk about episode two. [laughs] Episode one was in May, day and date with Quest.

GamesBeat: Does the story pull anything into itself from other Star Wars storylines, or is this all completely original?

Perez III: It’s definitely an original story within Star Wars. The nature of working in Star Wars is that it’s this huge mosaic where you’re constantly building things off of it. We’re respecting all of that. Anywhere we have cool story hooks we’ll bring it in, but this is really an original story for this platform. For us, that’s super exciting. We’re not just retreading other stuff. We’re crafting a new story here.

GamesBeat: One of the criticisms of the first episode was that you’re mostly doing two movements. It got to be fairly predictable. Are you trying to get away from that, expand on that?

Perez III: I think you’ll find the combat in this one is a lot more active than the last one. And it definitely is more organic, the way that you’re dealing with that.

MacKie: You literally have more dimensions. You’re dealing with the Force and you’re able to throw the lightsaber.

Perez III: You can push, pull, pick up things, throw things. You can grab rocks and chuck them at the little robot faces. You can smash them into each other. And in the dojo you can do all of that with the lightsaber. You can pick up a droid, throw the lightsaber to stab it there, pull it back, and then throw it at another droid. It’s madness.

Finley: There are a lot more types of enemies this time around, too. With the Force it opened it up to lava nymphs, to the dargast, to a bunch of new characters that would have been–with the lightsaber things had to come to you, like you were saying. Now you can go to them. It gives you more opportunities to be super powerful. 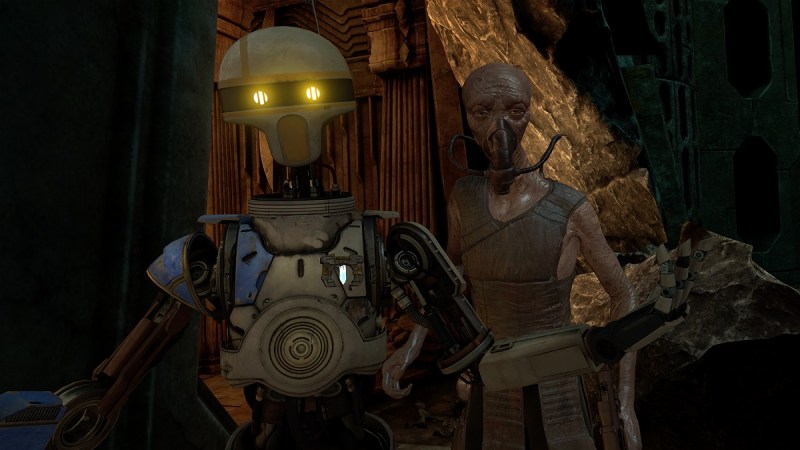 GamesBeat: They were getting behind me, too. Do you get a bit more exercise in this one?

Perez III: I feel like I’m getting really fit working on this project. [laughs] My right arm, for sure. This is just all muscle at this point.

GamesBeat: Is this one about the same length as the last one?

Perez III: It’s a pretty similar length for the story experience, yeah. I think the dojo in this one might go a little bit longer, though. It’s just more waves.

GamesBeat: Does that have to do with the comfort level people have in VR?

Perez III: I think it’s more that that we felt that was about the length that was comfortable for the story. I definitely think there’s a world where you could expand it over hours and hours, but for what we’re making now, we felt like this was a nice, clean drop for each one.

MacKie: I think so, too. We’ve found–we have a lot of these sorts of biases. “Oh, people like 15 to 20-minute thresholds for the time they spend.” But what we’ve found is that when it comes to something like Vader Immortal or other experiences we’ve helped people with, 45 to 50 minutes, an hour, people will stay in there that long if the experience is good. If it’s comfortable and exciting and interesting, they’ll stay in.

Perez III: We had a friend go through the other day. They came out thinking it was only 15 or 20 minutes, because they were so into it. “You were in there for an hour, dude.”

MacKie: One of the anecdotal metrics we use a lot is when someone takes off the headset and says, “How long was I in there?” They literally don’t know. When time dilates for people, that’s a good sign.

Work in the Age of Artificial Intelligence

The Lepow 15.6-inch portable monitor works perfectly with your smartphone

How to avoid awful mobile games — 6 tips you should know

Is a new Apple TV coming next week?

Should you buy the Xiaomi Mi Note 10?

ByteDance set to undercut Apple Music and Spotify in US

Facebook Dating Now Available in the US – Droid Life