by Techno Web
in Games
0

A Change.org petitioner Kajal Khetwani demanding a ban on PUBG Mobile game has been waiting to reach the targetted number of signatures for almost a year now. Khetwani started a petition to Public and youth’s support and Government of India last year seeking a ban on PUBG Mobile game. So far, she has reached just over 2,500 signatures in support of PUBG ban whereas the total numbers of signatures required are 5,000.

“The game PUBG might be a good game. But this game is making today’s youth so much indulge in mobile phones. I have 3 brothers 3 of them play this game regularly. They are now being distracted from their studies cause of this silly game. 2 of my brothers are in class 12th and I am so sure that they are gonna spoil their class 12th (be)cause of that game,” Khetwani described her petition on Change.org.

PUBG Mobile lists new cheaters, how to stay away from illegalities

However, the petition has clearly created a divide between those who are in favour of PUBG ban and those who are against the idea of banning PUBG game. Khetwani’s petition received support from users in comments who have explained reasons why authorities should ban PUBG Mobile game in India. 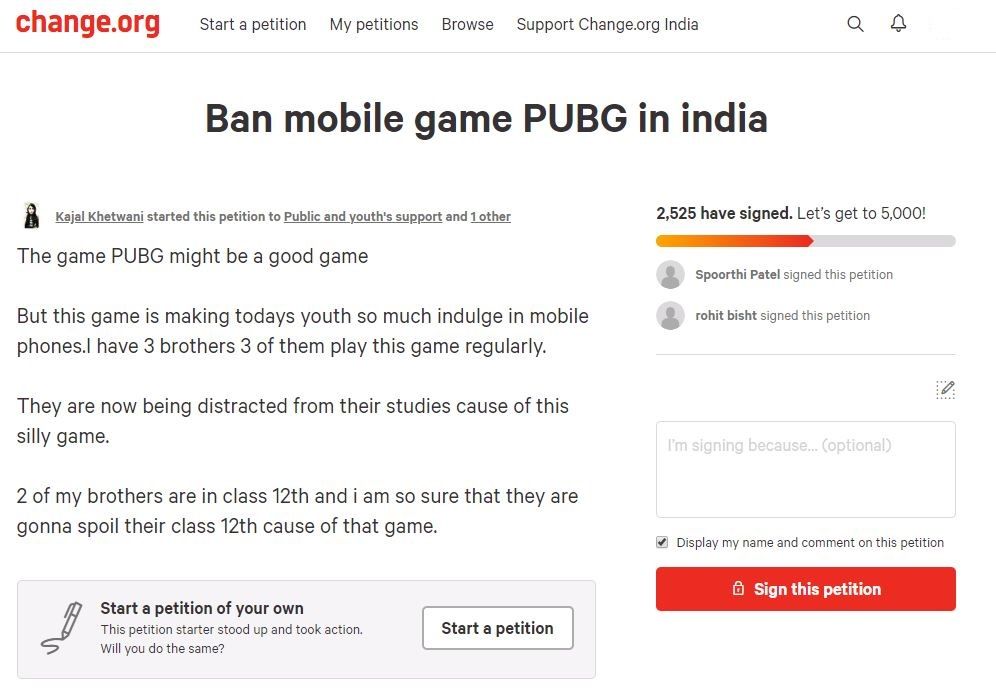 “I’m signing as this game has become extremely harmful to society. I used to play it as a way to relax after a long day, but people are killing each other over it. It’s promoting violence among the youth of the nation and causing them to neglect their academics. This game should be banned,” one user wrote.

“Too many people are suffering the anxiety of watching their kids at home going crazy and getting addicted to this game. Really worried how they can make a future. Today it is pubg and tomorrow it could be something else,” another user wrote.

PUBG should be banned or not? Experts divided over PUBG ban controversy in India

“PUBG should not be banned because it’s the only best game in Google Play Store,” one user wrote.

There has been a growing concern among parents over PUBG addiction among children. Earlier, there was a strong demand to ban PUBG Mobile from all the corners. In fact, authorities had also briefly banned PUBG in Gujarat. However, the public demand for a ban on PUBG appears to be declining since last few weeks.